Home Learn to Glow What Is Hydroquinone Made Of?

What Is Hydroquinone Made Of?

There seems to be some buzz in the beauty industry surrounding Hydroquinone. It’s one of the most effective agents for treating skin discolorations ranging from mild to severe. It’s also easily accessible, with non-prescription strength preparations including up to 2% Hydroquinone available for home treatment.

As with anything that’s getting attention, there are also some questions surrounding Hydroquinone, like what is it exactly and what is it made of. It actually isn’t that difficult to find some basic information on this amazing ingredient, but what about for those of us with a more scientific interest in Hydroquinone?

For those with an interest in the Hydroquinone molecule structure, formula and chemical mechanisms, here’s an opportunity for you to learn a little more.

When we strip away all the big words and get straight to the point, we can simply say that Hydroquinone is a melanin synthesis inhibitor. Melanin is the pigment that leads to skin discolorations, and Hydroquinone comes along and inhibits its synthesis. We’ll go a little deeper into this process in a minute, but first, let’s cover some basics.

The molecular Hydroquinone formula is C6H6O2 or C6H4(OH)2 – both representing the same molecule, just written differently. The structure is 2 hydroxyl groups that are bonded to a benzene (C6H6) ring, creating a Hydroquinone molecule with the molecular weight of 110.11 g/mol. In it’s purest form, Hydroquinone is a white, granular solid. 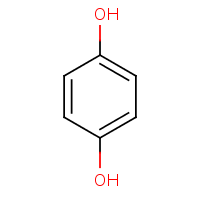 Understanding What Happens on a Molecular Level When You Use Hydroquinone

Hydroquinone is a substance that can be found in nature but is often created in a lab. In nature, it can be found in some plants and fungi, such as the Agaricus hondenis mushroom. It’s also produced in the body of an insect called the bombardier beetle, which utilizes it as a defense secretion. While Hydroquinone exists in nature, it usually isn’t practical to harvest it from natural sources. As a result, it is almost always manufactured in a lab.

Producing Hydroquinone in a lab involves combining a substance, typically benzene or phenol, with another chemical to initiate a reaction where Hydroquinone is produced, along with byproducts. Hydroquinone itself is the result of a redox mechanism involving other molecules.

Sometimes, the question arises about the relationship of Hydroquinone vs quinine. From a cosmetic perspective, there aren’t really any similarities between these two ingredients. Hydroquinone is a derivative of quinone, which is a word used to describe any aromatic compound having two carbonyl functioning groups in the same six centered ring. Quinine, on the other hand, is an alkaloid that’s derived from cinchona bark and is a common ingredient in tonic water.

When applied to the skin, Hydroquinone reduces melanin production via inhibition of the tyrosinase enzyme, a critical component in the first steps of the melanin pigment biosynthesis pathway. Part of this process involves the release of uncharged molecules that interfere with melanosomes – melanin containing organelles.

What follows is the inhibition of the enzymatic conversion of tyrosine – an important amino acid – to dihydroxyphenylalanine (DOPA), resulting in a reduction of melanocytes, and thus melanin, in the affected area.

Why Proper Use of Hydroquinone Is Important

Non-prescription strength formulas can contain up to 2% Hydroquinone. More severe, or stubborn, cases of hyperpigmentation can be treated by a dermatologist with a formula that exceeds this amount, usually with 4%, although in some cases the concentration might go higher.

While Hydroquinone is a great ingredient for improving the appearance of your skin, there are some noted side effects. These include relatively minor symptoms such as redness, photosensitivity and irritation. When ingested, Hydroquinone can be toxic, so care should be taken to treat this skin lightening agent as medication, including keeping it out of reach of children.

Hydroquinone concentrations of just 2% have been shown to be incredibly effective in treating mild to moderate hyperpigmentation. If you’re automatically thinking that you’ll need a formula that’s stronger than what’s found in over the counter products, here’s something to stop and consider. Higher concentrations can actually cause a recurrence of excessive melanin synthesis and eventually resistance to the ingredient.

For example, high Hydroquinone concentrations can induce a toxic effect on melanocytes. At first, this seems like a great thing for hyperpigmentation. However, every molecule and cell in you’re the human body has its own defense mechanism. When too high of a concentration is used, it causes the melanocytes to group together and actually increase their melanin production in response.

Your skin is one of your most valuable assets, and it should be treated with the respect that it deserves. When using Hydroquinone, always choose a formula from a reputable brand, with a commitment to using only the best ingredients. And, for the sake of the health of your skin and your body, stay away from any Hydroquinone product with a concentration higher than 2% unless it was specifically prescribed to you by a physician that understands your unique skin condition. Hydroquinone is an ingredient that can help you regain beautiful, even toned skin, but only if it’s used properly and respected for the powerful ingredient it is.

Discover how to build the most effective skincare regimen with our top selection of brightening skin products to banish dark spots and uneven skin tone.

Liquid error (product-grid-item line 137): include usage is not allowed in this context
One of the most effective serums for helping fade hyperpigmentation, dark spots and Melasma. Due to its unique blend of ingredients, this formula outperforms other hydroquinone products and creams. This is a potent, yet extremely effective product. Some sensitive skin...
£39.00 £21.00
-44%

Liquid error (product-grid-item line 137): include usage is not allowed in this context
Contains Retinoic Acid For Potent Anti Aging & Eliminating Breakouts Participants who used this retinoid cream for 6 weeks experienced a 52% REDUCTION in their WRINKLES and 70% Redness Reduction! Of the candidates that participated in the study, 94% saw an...
£34.00 £19.00
-47%

Liquid error (product-grid-item line 137): include usage is not allowed in this context
All Natural Non Comedogenic Dry Oil for Face This decadent dry facial oil contains a potent blend of Liposomal Vitamin C, Argan Oil, Rosehip Oil and Sea Buckthorn Oil. It's designed to be applied directly to your skin or mixed...
£35.00 £19.00
-26%

Your cart is currently empty.

is added to your shopping cart.

You have successfully subscribed!
This email has been registered